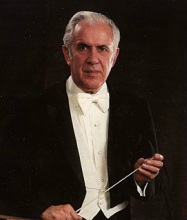 
Dr. Begian's musical training was in the public schools of Michigan where he studied studied trumpet with Leonard Smith and flute with Larry Teal. He received bachelor's and master's degrees from Wayne State University in Detroit, and later earned his doctorate at the University of Michigan at Ann Arbor.

Begian organized and conducted his first band and orchestra while in his late teens and studied conducting at Tanglewood, summer home of the Boston Symphony Orchestra. He appeared as guest conductor, adjucator, clinician, and lecturer throughout the United States and Canada. Along with a very busy work schedule, he finds time to conduct operatic and Broadway performances, community symphony orchestras, community concert bands, and a church choir. In 1987, the musicians of the Detroit Symphony Orchestra invited Dr. Begian to present a formal concert in Detroit’s Orchestra Hall.

A Charter member of American School Band Directors Association he is also a Past-President of the American Bandmasters Association, the College Band Directors National Association, Omicron Delta Kappa, and
honorary member of Phi Beta Mu and the Michigan School Band and Orchestra Association. His professional affiliations include memberships in Phi Mu Alpha and Phi Delta Kappa. Most recently he was conferred honorary memberships in Kappa Kappa Psi and Tau Beta Sigma.
Dr. Begian is a recipient of the National Band Association Citation of Excellence, the American School Band Directors Association Edwin Franko Goldman Award, the Notre Dame St. Cecelia Award, and was elected to the Academy of Wind and Percussion Arts. His more than 60 LP recorded performances with the University of Illinois Symphonic Bands comprise one of the largest and finest collections of recorded band performances in existence.

After a year of retirement, Begian returned to the podium as conductor of the Purdue University Symphonic Band from 1985-1987. He is presently active as guest-conductor, clinician, adjudicator, and lecturer with over 30 engagements a year, and is a Consulting Editor to The Instrumentalist magazine. In December 1993, Begian was awarded the Grainger Medallion in recognition of his distinctive contributions for the performance of Percy Grainger’s music. In February 1994, he was enshrined in the Hall of Fame of Distinguished Band Conductors.