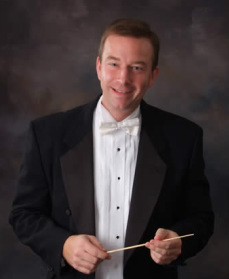 Scott A. Stewart is the Director Wind Studies at Emory University, where he joined the faculty in the fall of 1999. He serves as music director and conductor of the Emory Wind Ensemble and the Atlanta Youth Wind Symphony, and teaches courses in instrumental conducting, wind band literature, and film music. Stewart is the recipient of the Winship Award for Senior Lecturers in the Emory College of Arts and Sciences for 2011-12 and the Faculty Appreciation Award from the Office of Admission in 2009.

Stewart has conducted the Georgia All-State Band and performances by the Atlanta Youth Wind Symphony at the GMEA State In-Conference in Savannah, Carnegie Hall in New York City, Alice Tully Hall at Lincoln Center for the Performing Arts, the Midwest Clinic in Chicago, the national MENC conference in Milwaukee, and Southern Methodist University in Dallas, as well as broadcast on Public Radio International’s acclaimed radio show, From the Top and featured regularly on WABE 90.1’s “Atlanta Music Scene.”  In 2013, the AYWS will perform at Disney Hall in Los Angeles.  The Emory Wind Ensemble has performed at GMEA in Savannah as well as two performance tours of Europe (Rothenberg, Munich, Innsbruck, Salzburg, Lucerne, Vienna, Prague, and Graz) and a recent concert tour of Greece.  He is the founder and on-air host of “Summer Winds,” a program devoted to wind band music on Atlanta’s National Public Radio affiliate, WABE 90.1 FM, which begins national syndication in the summer of 2012.  Stewart is also heard frequently on the air “pitching” during the biannual fund drives with WABE program director Lois Reitzes.

Stewart is a contributing research associate for volumes 2-9 of Teaching Music Through Performance in Band, as well as Teaching Music Through Performance of Marches, all published by GIA. He has presented scholarly papers at the Hawaii International Conference on the Arts and Humanities and the Internationale Gesellschaft zur Erforschung und Förderung der Blasmusik in Oberwelz, Austria.  He has also published in The Instrumentalist and Music Educators Journal.

To serve the greater Atlanta community in music education outreach, Stewart facilitates and participates with Emory artist affiliate faculty in bringing students and teachers in contact with great artist/pedagogues throughout the year.  Regular events include Saxophone Day, Bassoon Day and the Summer Bassoon Extravaganza, Atlanta Percussion Symposium, International Euphonium Institute, and the Atlanta Trumpet Festival.  Stewart founded the Emory Summer Concert Band in 2010 as part of the Emory Pre-College Program and to model an integrated, diverse community ensemble.

With Dr. Laurie Scott at the University of Texas, Stewart is co-founder and director of Bend the Twig, Inc., a non-profit organization that promotes the integration of character education in music classrooms. In this capacity, he has appeared nationally at education and music conferences, presents in-services for teachers and administrators, and frequently writes on topics of character and ethics in the performing arts.

An active saxophonist, he is founder and member of the Emory Saxophone Quartet, which has performed at the Rome Symphony Orchestra, the High Museum, and throughout the city.  Stewart has performed on American Public Media’s “Pipedreams Live” hosted by Michael Barone, with the Amelia Island Chamber Music Festival, and at St. Phillip’s Cathedral (Atlanta) and the Cathedral of St. John the Divine (New York City) with organist David Lamb.  Two recent CDs feature his playing:  “Beyond the Horizon, volume 2” with Adam Frey, euphonium; and Michael Finnerty, piano; and “Gothic Chills and Reverberating Thrills” with David Lamb.

At Emory University, he is departmental liaison for the PACE advising program and coordinates the undergraduate recruitment initiative for the Department of Music.  He served on the Emory Scholars Selection Committee for eleven years, and is currently is a member of the Emory Scholars Advisory Board, Emory College Admission and Scholarship Committee, Pre-College Program Advisory Board, PACE Advisory Board, the Emory College Honor Council, and has been a freshman advisor for twelve years.  He was recently honored by the Emory University student body by being selected to present the annual “Last Lecture,” has been a “faculty spotlight speaker” for Family Weekend for the past two years, and was faculty convocation speaker in 2011.