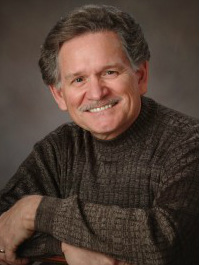 James Curnow was born in Port Huron, Michigan and raised in Royal Oak, Michigan. He lives in Nicholasville, Kentucky where he is president, composer, and educational consultant for Curnow Music Press, Inc. of Nicholasville, Kentucky, publishers of significant music for concert band and brass band. He also serves as Composer-in-residence Emeritus on the faculty of Asbury College in Wilmore, Kentucky, and is editor of all music publications for The Salvation Army in Atlanta, Georgia.

His formal training was received at Wayne State University (Detroit, Michigan) and at Michigan State University (East Lansing, Michigan), where he was a euphonium student of Leonard Falcone, and a conducting student of Dr. Harry Begian. His studies in composition and arranging were with F. Maxwell Wood, James Gibb, and Irwin Fischer.

James Curnow has taught in all areas of instrumental music, both in the public schools (five years), and on the college and university level (thirty years). He is a member of several professional organizations, including the American Bandmasters Association, College Band Directors National Association, World Association of Symphonic Bands and Wind Ensembles and the American Society of Composers, Authors and Publishers (ASCAP).

As a conductor, composer and clinician, Curnow has traveled throughout the United States, Canada, Australia, Japan and Europe where his music has received wide acclaim. Curnow has been commissioned to write over two hundred works for concert band, brass band, orchestra, choir and various vocal and instrumental ensembles. His published works now number well over five hundred.